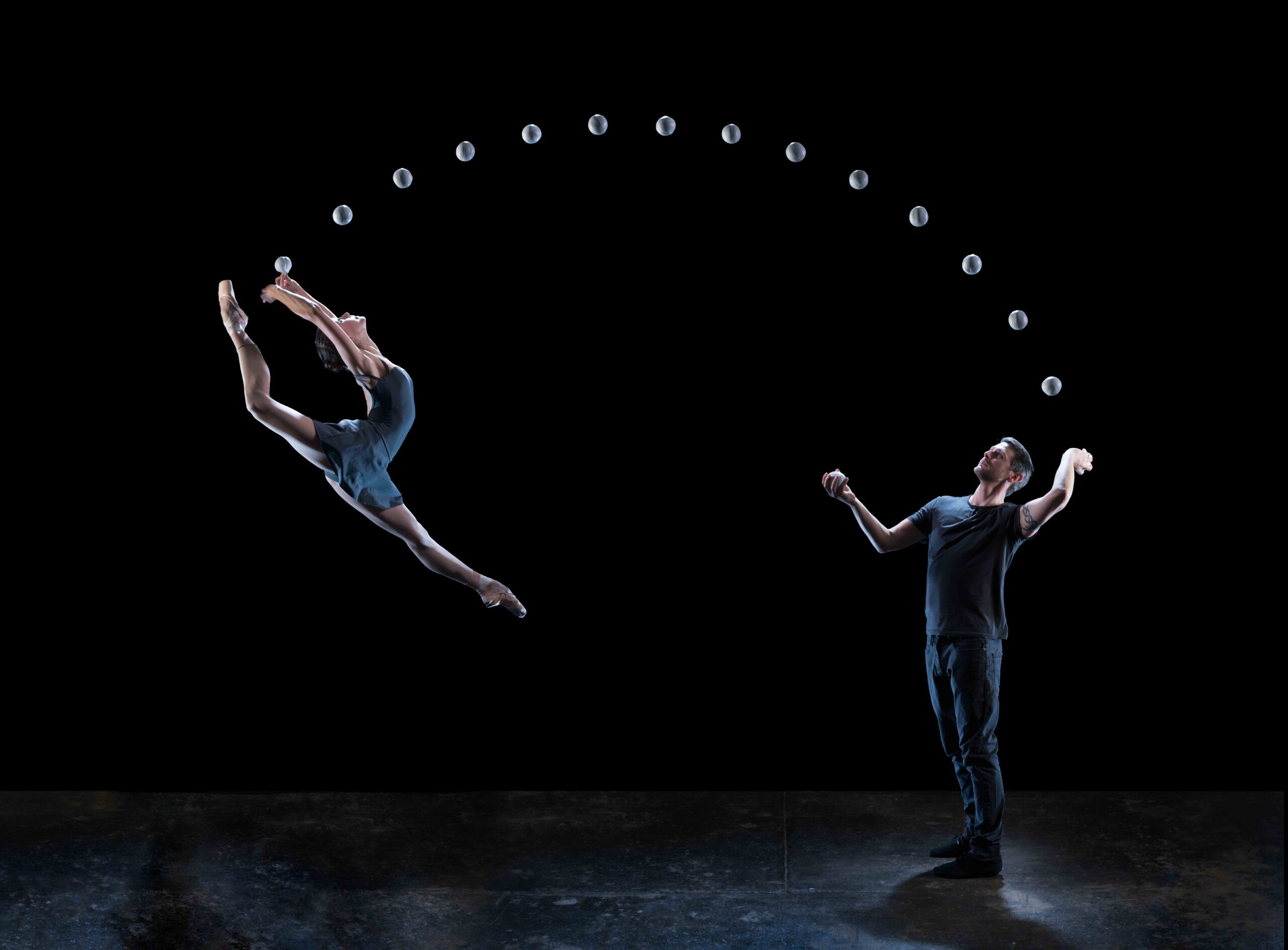 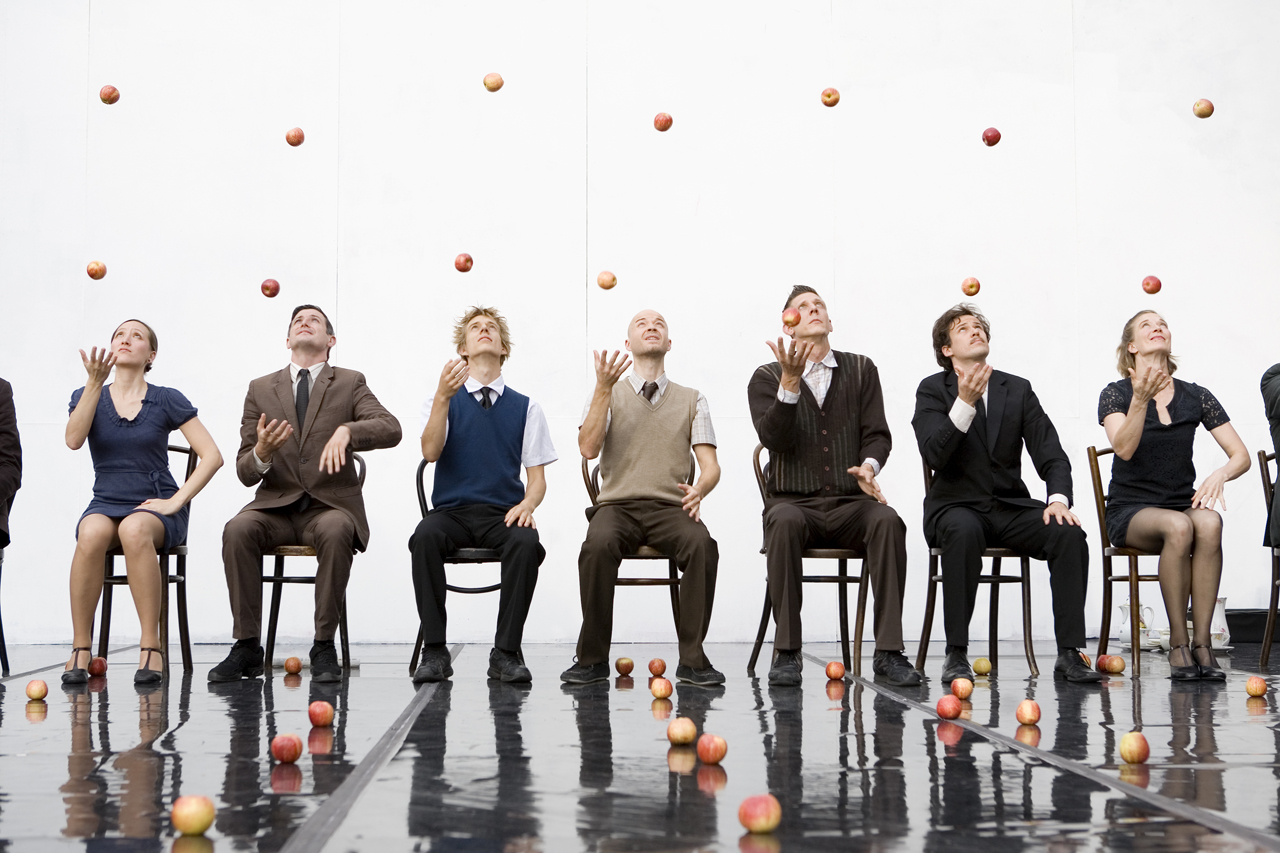 AT THE FOREFRONT OF BRITISH CIRCUS’ QUIET REVOLUTION’ The Guardian

World-renowned jugglers Sean Gandini and Kati Ylä-Hokkala set up Gandini Juggling in 1992. Over the past 29 years the company has performed at the world’s most prestigious festivals and venues, totalling over 6,000 shows in 50 countries. To date the company has created over 50 productions for indoor, outdoor and digital spaces, performing to hundreds of thousands of people worldwide.

Initially teaming up with the pioneering and influential choreographer Gill Clarke, Gandini’s explorations into dance has seen them fuse juggling with Bharatanatyam, classical ballet and contemporary dance. Gandini has built a reputation for innovation in artform and artist development – pushing the boundaries of contemporary circus by combining dance into their work and forcing the threshold of juggling in its own unique direction. This innovation in artform development has seen the company work with a wide range of cultural leaders, developing a cast of world-class jugglers, dancers and musicians. The company was also pioneering in their use of technological advancement in the notation language of siteswaps, which has set Gandini apart, enabling them to create breathtaking large scale synchronized productions that have seen the company launch the Millennium Dome and take part in the London 2012 Paralympic Opening Ceremony.

Over the years Gandini has collaborated with leading practitioners such as the pioneering American musician Tom Johnson, First Artist with The Royal Ballet Ludovic Ondiviela, composers Nimrod Borenstein and Gabriel Prokofiev, mezzo-soprano Emma Carrington and countertenor Anthony Roth Costanzo, Rambert Associate Alexander Whitley, director Phelim McDermott (working together on the award-winning Akhnaten by Philip Glass and produced by the English National Opera) and renowned Lighting Designer Guy Hoare. In 2017 the company collaborated with Dominique Mercy, a long-serving dancer for Tanztheater Wuppertal Pina Bausch. A collaboration that served as an accolade to the quality of the company’s work to date.

Currently, Gandini has the pleasure of working with Jennifer Goggans in partnership with the Merce Cunningham Trust and the Pulitzer Prize and Grammy award-winning composer Caroline Shaw. Working towards LIFE, a  juggling performance that is based on the choreographies of Merce Cunningham and his rich legacy.

The company also co-produces Wes Peden and tours productions which include:

– Smashed: The Pina Bausch inspired piece which premiered at the National Theatre, London 2010.
– 4×4 Ephemeral Architectures: Premiered at the Royal Opera House in 2015 and is a fusion of juggling
and ballet created with former Royal Ballet dancer Ludovic Ondiviela and with original composition
‘Suspended opus 69’ by Nimrod Borenstein, performed live by chamber ensemble Camerata Alma
Viva.
– 8 Songs: A series of choreographed juggling vignettes set to 8 classic rock songs Commissioned by
Without Walls, Ageas Salisbury International Arts Festival and GDIF in 2015.
– Sigma: Developed in partnership with Seeta Patel is a Bharatanatyam and juggling piece which
received the Total Theatre Award for Visual Theatre and the Asian Arts Award for Best Directing in
2017.
– Spring: a contemporary dance piece created 2018 in collaboration with renowned choreographer
Alexander Whitley and composer Gabriel Prokofiev which premiered in January 2019 in London at
Sadler’s Wells.

Globally, Gandini has a reputation as one of England’s most iconic circus companies, showcasing twice with the British Council, Gandini has toured over 80 performances across Russia, the Middle East, Asia, Canada, Central and South America to name a few. Mark Crossey, Programme Director, British Council Indonesia has cited Gandini as ‘innovative and unique’ with the company’s work proving highly accessible for a broad spectrum of audiences with different socio-economic and cultural backgrounds regardless of age, gender and ethnicity.